DisplayLink video adaptor on the Mac 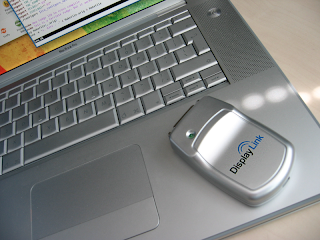 At the ACCU conference this year I was lucky enough to pick up a DisplayLink USB video adaptor (the beast is pictured here). This was particularly interesting as the guys at DisplayLink have just released a beta Mac driver for their products, and these days I'm a big Mac weenie.

For some time I (and the rest of the world) have been impressed at the technology they've produced; you can get DisplayLink technology wrapped up in everything from a laptop docking station to a USB monitor itself. And - up till now - it's worked on PCs very well indeed. There's clearly some clever stuff going on under the hood.

But how well does it work on the Mac?

The answer is: pretty darn well. Considering this is a beta driver, it's a fairly polished beast. The install went very smoothly (although, unfortunately, this is one of those few installs that requires a MacOS reboot). The Mac has always coped gracefully with multiple monitors, and the DisplayLink adaptor appears like any other USB monitor - plug the device in and MacOS detects another display. It just works!

I have had no stability issues with the driver, it works over all colour depths and screen sizes, and it's a really useful extension to have. My MacBook pro now has three displays: the LCD screen, the VGA output, and the DisplayLink card.

There are downsides...
If you have a mac and want more screen real estate, I'd heartily recommend a DisplayLink device. The technology is very exiting, and the ability to add an arbitrary number of monitors to one machine is very compelling.

I can't help but be excited about what the future holds for DisplayLink products. They have some very clever guys working there, and will most certainly be looking far out into the future to work out what they can do with the technology. I can't wait to see a wireless USB monitor, for example - imagine placing your laptop on a desk, switching it on, and your three monitors wake up and appear as extra displays with no plugging or button pushes required.