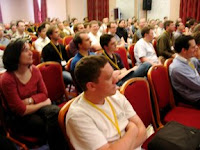 Day two of the ACCU 2008 conference... another barrage of technical information and geeky entertainment.

Thursday's timetable had a refreshing functional programming track, which was headlined by Simon Peyton Jone's keynote: Caging the Effects Monster. Great stuff. I can only admire the man for being a fellow bare foot presenter! Simon took us on an entertaining journey into functional programming and how it can be used to minise the risks of "effects" (or rather, dangerous side-effects) in our software. He also made amusing reference to my "object tickling" metaphor from the presentation I gave yesterday.

The functional programming track continued with Joe Armstrong (self-confessed quirky Englishman) explaining the motivation for Erlang, and finishing with an 11 minute introduction to the language syntax delivered in minutes.

Favourite Armstrong quotes:
Later the day included John Lakos on a heroic romp through 564 slides in 90 minutes whilist providing a classification model for objects, in order to aid testing, and to validate the new C++ scoped allocator model. 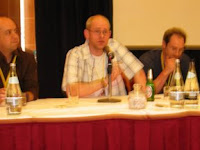 The conference sessions closed with a geeky version of Just a Minute. Great fun, and I'm obliged to mention it mostly because not only was I on the panel, I won :-)
Posted by Pete Goodliffe at 01:11