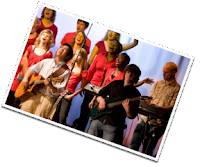 I've just got back from an awesome weekend at C3's annual leadership conference: The Crossing.

It was great fun, but tiring work - I was playing keyboards in the band.

Kudos to all the people involved that made it such an awesome event, from the organisational brains behind the scenes, to the speakers (which included Jeff Lucus, Paul and Priscilla Reid, and Steve Campbell), to the band and choir, the PA/rigging guys, the stewards, refreshments team, and every single other person. It takes an immense effort to put on an event like this, and it was an honour to be a part of the team.

Now to get some sleep (or tackle the next threading problem)...